Haussmann in the morning, one of Paris’s major crossroads

Forever associated to the Grands Magasins and a constantly evolving idea of French Chic, the Haussmann neighborhood is also a place where all sorts of Parisians meet. In this month of September like no other, they’re busy, they’re in a hurry, and they’re wearing masks.

After their summer was seriously disrupted by the Covid-19 pandemic, Paris’s inhabitants took comfort in a particularly clement month of September. But the holidays are long gone for this high school student who’s dragging his feet, or these children who are being dragged by the arm to school… The same goes for this cleaning agent and his goofy machine, which looks like a plastic elephant on wheels. All of them are wearing their mask, but apart from that, life has gone back to normal. 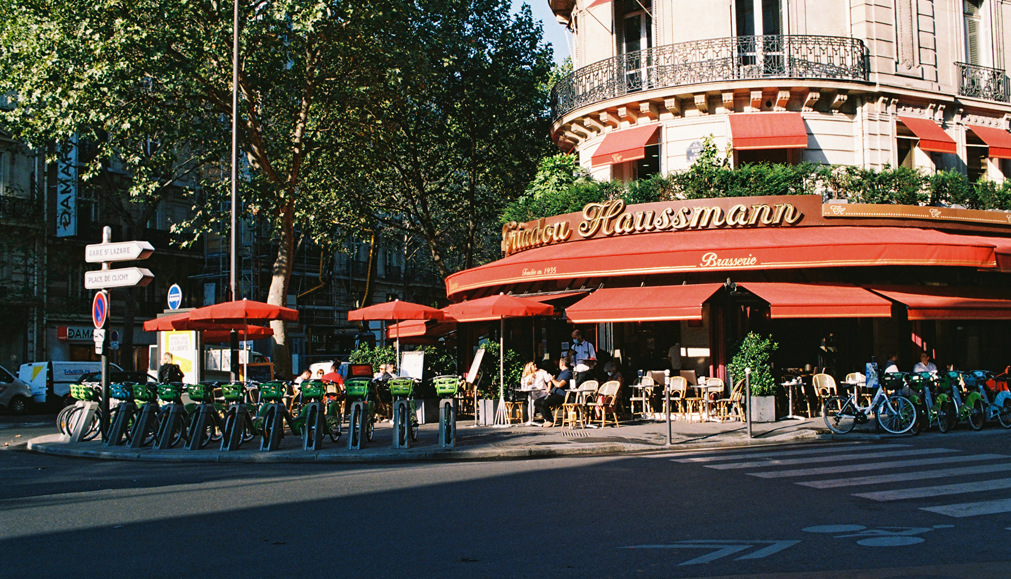 In the wee hours when Paris wakes up, the pedestrian who’s naturally in a rush at this hour can only stop for a few seconds to extend his arm and grab a copy of free daily newspaper 20 Minutes. That morning, it’s being handed out by Stéphanie, who’s out at the rue Lafayette / Boulevard Haussmann crossing between 8 and 10 a.m.. If those busy people want to stop and spend some time together, they can push the door of the Sofa Café, on the Boulevard Haussmann. Two colleagues wearing a chino and a polo are talking at the bar, masks on their chins, cups of coffee underneath their noses. Terence, who specializes in isolation and wears a t-shirt with a pair of sneakers, joins them inside. A simple, polite nod is all they need to share something this morning. Behind his counter, the bartender keeps a happy face despite the circumstances: “with so many people working from home, we have 3 to 4 times less customers as usual! We’re really feeling our way along, because it fluctuates from one day to the next. But the morning hours were always about preparing the lunchtime rush, anyway: cleaning, setting up, taking deliveries…” The man in the black waistcoat serves another Espresso and Terence puts his mask back over his nose to start his day, working on a restaurant which is due to open before the end of the year. On his way there, he might come across the movie crew who’s busy around French movie star Franck Dubosc on the rue du Havre sidewalk. Wearing a vintage leather outfit and perched on slightly lifted ankle boots, Dubosc is shooting Rumba la vie, expected in theaters in 2021. Once the crew have their shot, cameras and portable barriers disappear in a matter of seconds… and pedestrians can take the sidewalk back. Life goes on, always. 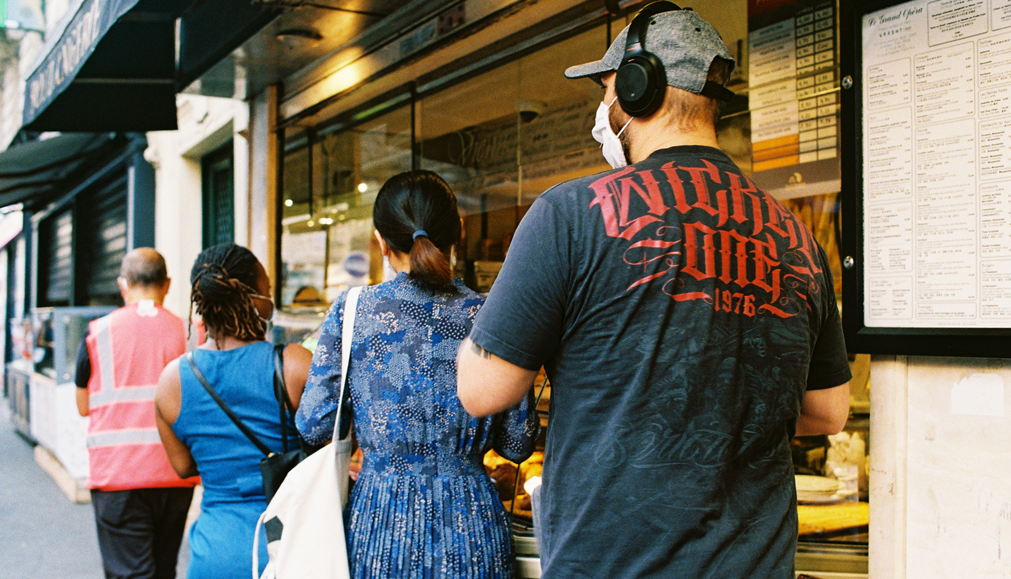 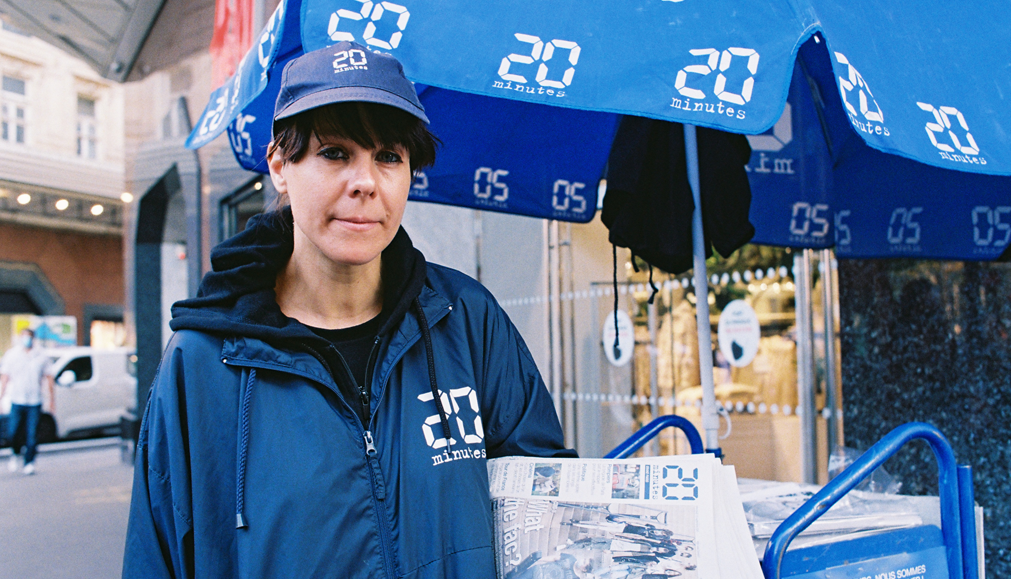 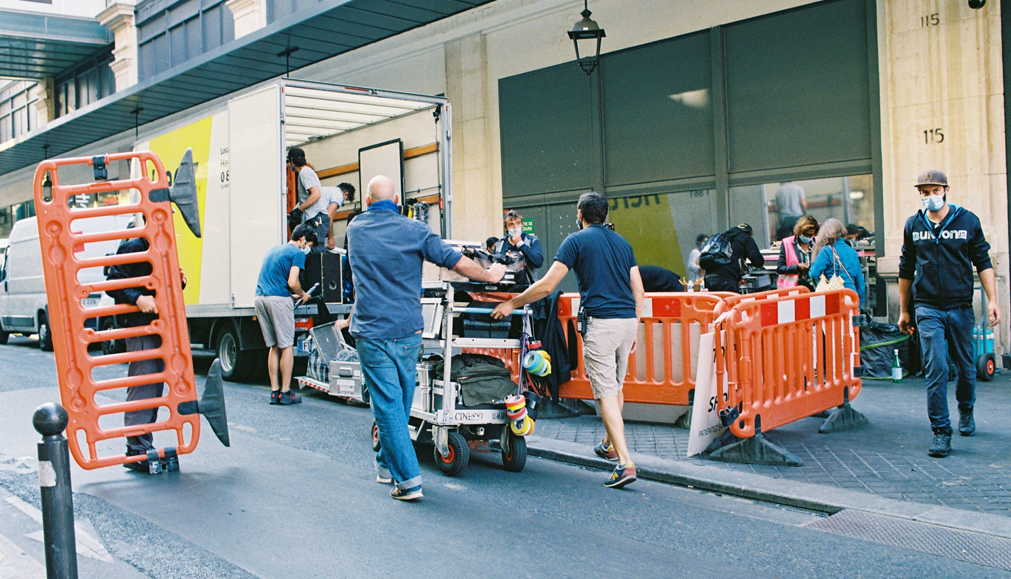 The Grands Magasins and their thousands of busy bees
“What we sell the most in the morning are pastries… Pains au chocolat, croissants, Parisian classics if you like!” Dida Kaoudj is a vendor at the bakery and pastry shop Le Grand Opéra, at the crossing of rue de Provence and rue de Mogador. Le Grand Opéra first opened in 1900, according to its green awning, and this morning, this bakery that doubles as a restaurant at lunchtime opened its doors at 6:30 a.m.. “We often have workers from the Galeries Lafayette waiting for us to open”, Dida adds. Several electricians from the Galeries Lafayette are enjoying a cigarette break a few meters away from there, on the sidewalk. Their workday has indeed started at 7, and it’ll finish at 3:30 p.m. in order to bother the store’s customers as little as possible. The Haussmann neighborhood is lively, hyperactive even, and everyone goes about their business, but the Grand Magasins have such pull that they have a central place in most of their neighbors’ lives. Vahid is in charge of a newspaper kiosk on the Boulevard Haussmann: “It’s pretty calm for us until 11 o’clock, when the Galeries Lafayette open their doors, since they open at that time and not 10 like they used  to”. He still opens his kiosk from 9:30 a.m. to 8 p.m., to satisfy the remaining customers of print media on their way to or from work. An Iranian student of architecture whose smile seems to pierce through his mask, Vahid has been working in this kiosk for 3 years and takes advantage of the day’s downtime to leaf through the architecture magazines laying in the upper rows of his display. 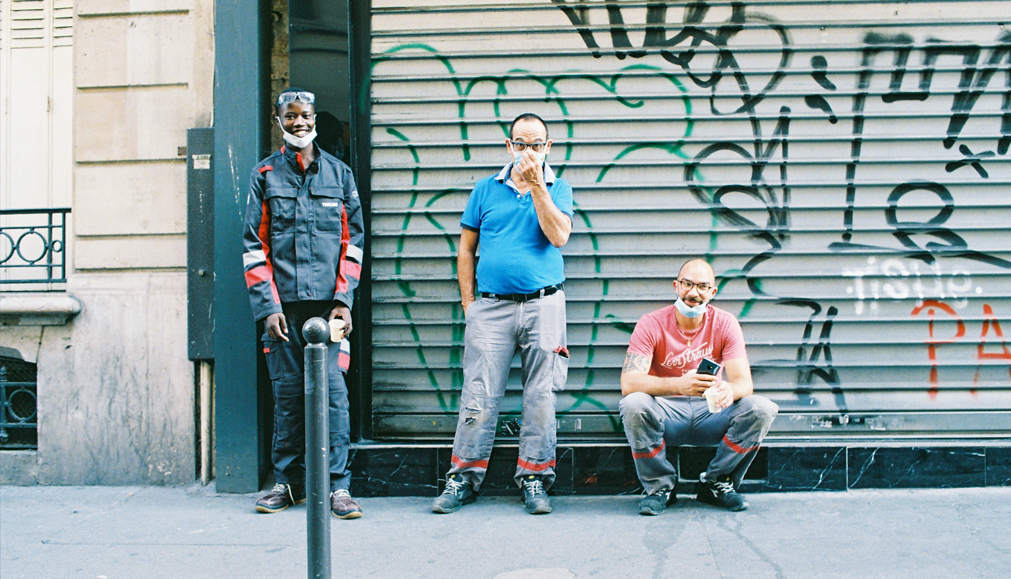 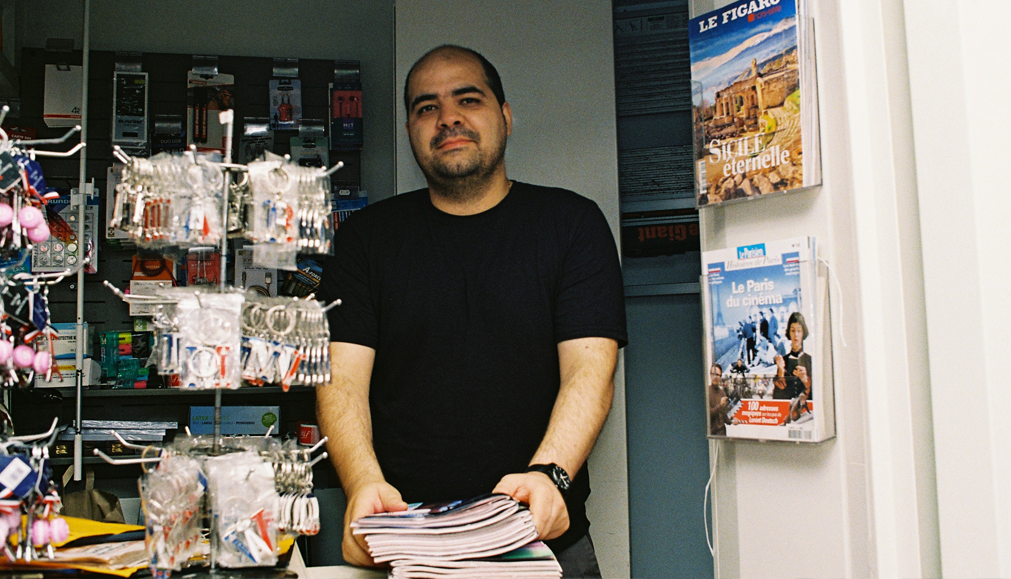 What if French chic was really about perfume?
We know that the Haussmann name is associated to a certain idea of French chic or elegance, but how does the neighborhood live up to this reputation coming out of bed? Lucie is a clerk at the Boulevard Haussmann’s Sephora shop: “people come in the morning a lot, if only to put on some perfume with the dispensers we have in store…” It makes the young woman smile and reminds everyone that chic has to deal with the constraints of life at work, far from the frozen images imposed upon us by advertising. Or maybe it confirms the old cliché according to which French people hide bad hygiene under good perfume… Clara Cheneau is entering her third year in university with a double major in economy and geography. Today, she’s conducting polls to make some spending money. A little more than 5 minutes with the 18 to 35 year-old female pedestrians who care to stop by, during which Clara has them smelling 3 different perfumes and answering a few questions. Posted on the car-free part of the Rue Caumartin, between the Passage du Havre and the Grands Magasins, she isn’t the only one to take advantage of the constant stream of pedestrians. “There’s plenty of people who do the same kind of polls, but also some who do some fundraising for Amnesty International or Acted… And on Mondays, there are those who hand out potato chips to try!” She laughs about it with one her colleagues and starts again: “People are usually in a rush because they’re working, but they have more time in the afternoon: we usually get 15 to 20 people to answer each day”. Enough to fuel an always-evolving definition of chic? Shrugging her shoulders, Clara hopes so. 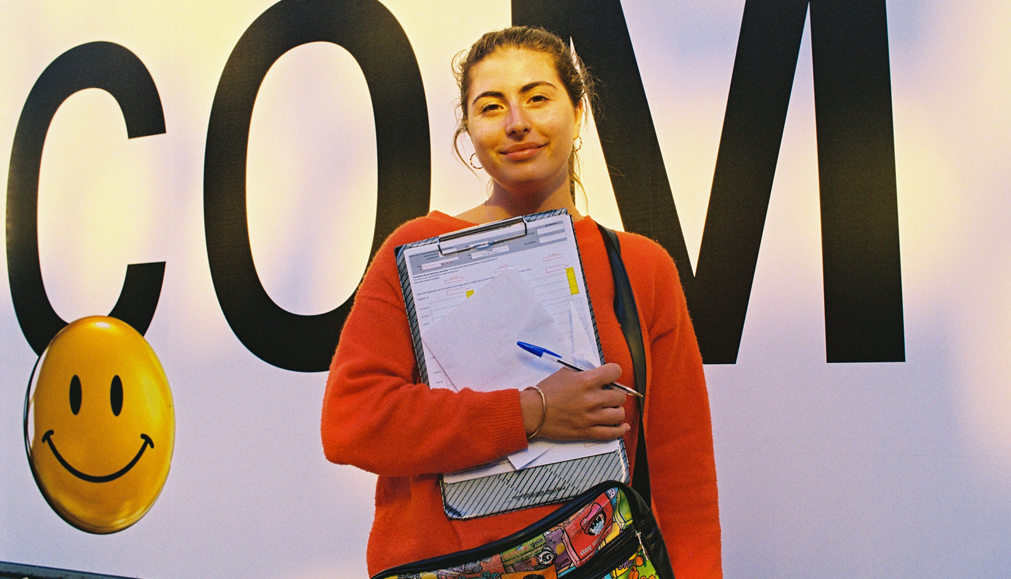 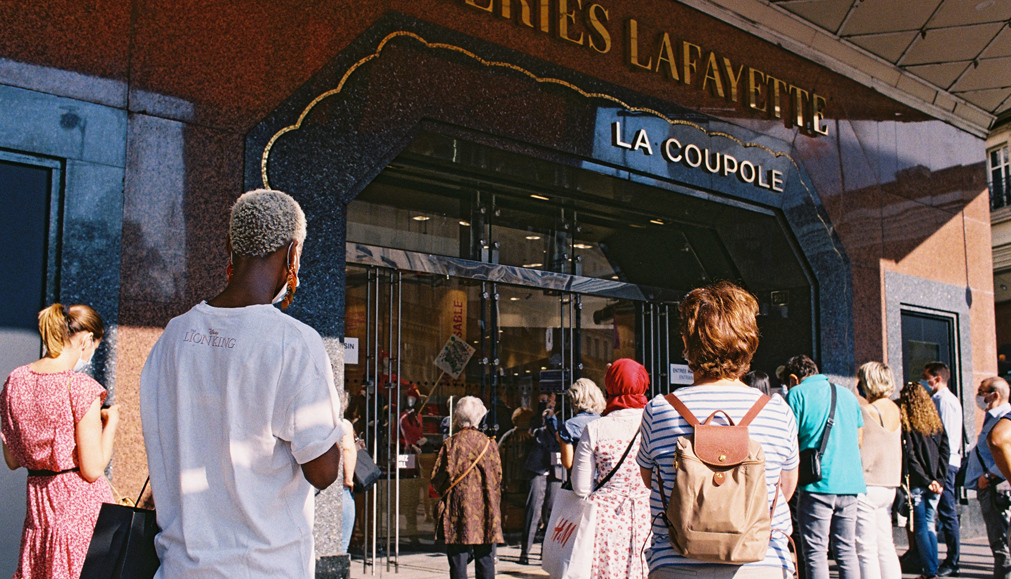 It’ll be 11 in a matter of minutes and a small crowd has gathered in front of the Galeries Lafayette, at the Lafayette/Haussmann entrance. They’re waiting for the doors to open and, despite the masks, the updated schedule or the Indian summer heat, the day can finally start!Lafayette, à l’angle Lafayette/Haussmann. Ils guettent l’ouverture des portes et, malgré les masques, les horaires aménagés ou la chaleur de l’été indien, la journée va enfin pouvoir commencer !