Every year, starting in November, the spirit of Christmas takes over the part of the Boulevard Haussmann where the Grands Magasins, Le Printemps and Les Galeries Lafayette, stand. Passers-by, residents and tourists linger in front of the store windows, specially garnished for the holidays. Some of them stopped to explain why they were there, this year or every year… 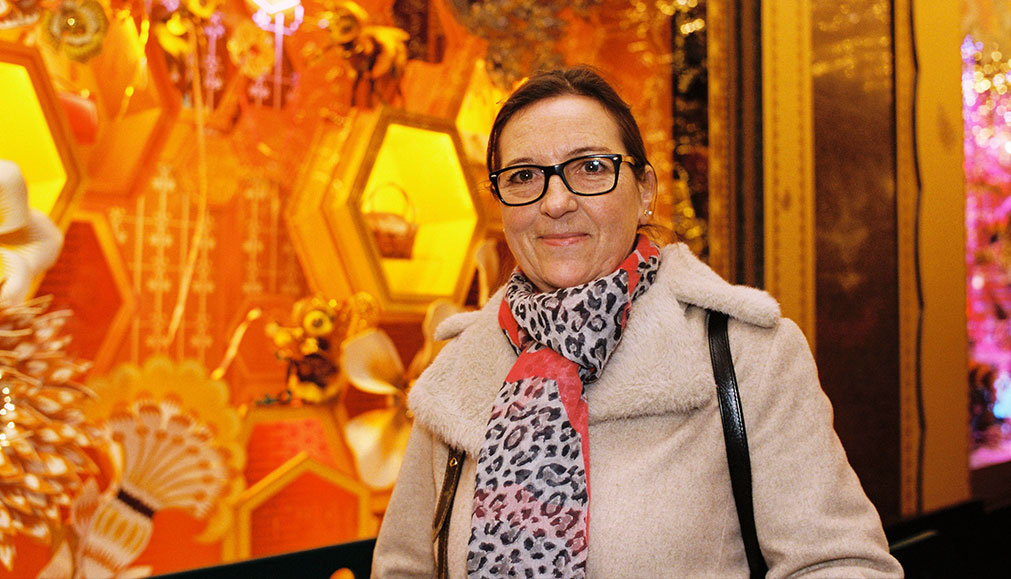 Adélaïde Pereira almost came as a neighbor: she lives in Villepinte, in nearby Seine-Saint-Denis, but has been working as a caretaker in the neighborhood for over thirty years. “The neighborhood always has been very animated, with lots of shops and Christmas decorations, she notes. I already took my children to see the windows and I’m coming with my grandkids next week so…  I’ve been coming for more than twenty years, can you imagine?” If Ms. Pereira leaves the shopping in the Grands Magasins to her husband “because he likes designer clothes”, she enjoys strolling in front of the windows and the great Christmas tree inside the Galeries Lafayette. She takes a few pictures or videos with her phone, before taking the little ones. “The pictures or the video I just took, I put on Facebook for everyone to see”, she says with a smile. 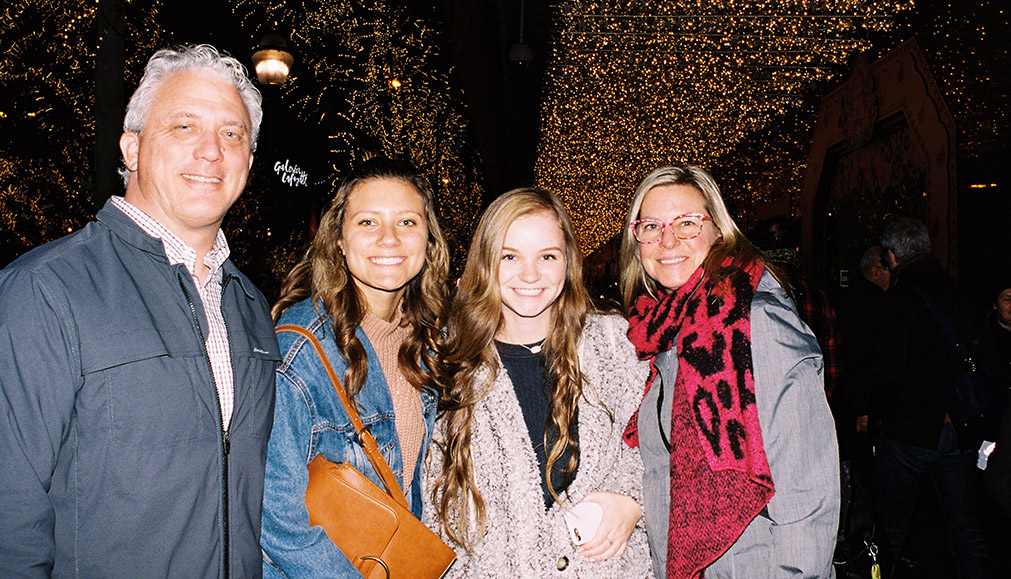 Also in front of the Galeries Lafayette windows, Doug Rippy’s warm figure hangs around the giant bees that move behind the glass panel. Hailing from Columbus, in the United States, and accompanied by his wife and two teenage daughters, Doug realizes that the French – also – know how to work this “Christmas magic” that takes over his countrymen once a year. Do they do it better? “I’ve seen the Christmas windows of Macy’s, in New York, and these are much more animated and not as product-oriented. There’s more storytelling”. Doug had already been to  Paris on a business trip, but he’s taking his family along for the first time and has seen enough to compare: “it’s one of the most beautiful tourist sites we’ve done in Paris yet, especially with the small lightshow inside. It’s just as nice as  the Eiffel Tower or the Champs-Élysées…” After five days in Paris, the Rippys will head to London, and lights who may shine slightly less. 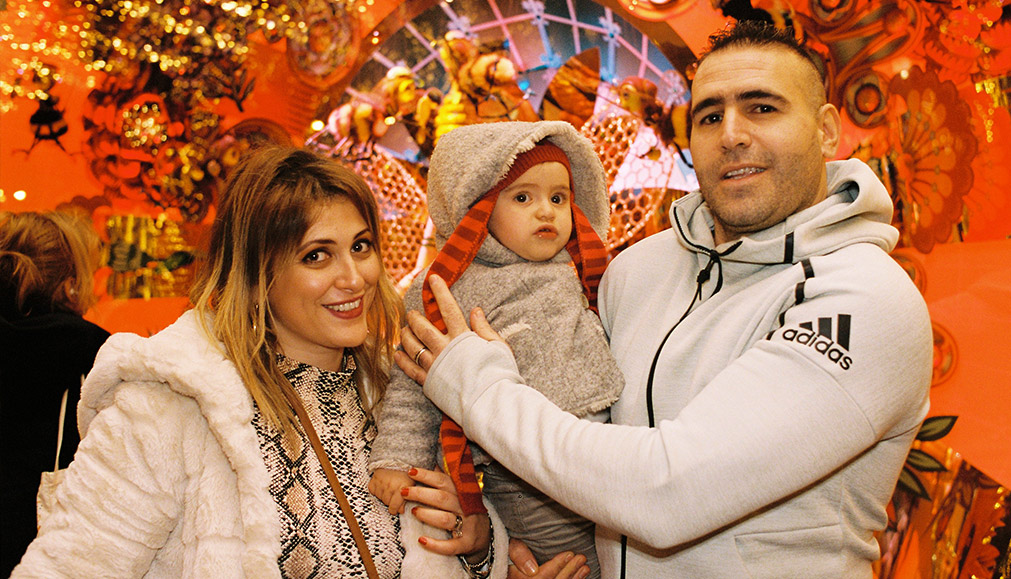 “There are no shop windows like that in Tizi-Ouzou or anywhere in Algeria, really… It’s so beautiful. I’m glad I came” enjoys Hamid Idir, who comes from  “Tizi”, the second biggest town in Kabylia after Béjaïa.  Over there, Hamid is a shopkeeper himself: he runs a sporting goods shop.  If he came to take a look at the epicenter of French consumerism, it was his wife’s idea: “we came here specifically to see the windows with my daughter, because my wife really wanted to show them to us.  Since we’re here, we might as well start our Christmas shopping in the Grands Magasins”.  Hamid, his wife and daughter will go back to Tizi-Ouzou after celebrating Christmas in France.

Nicola Serafini has been living in Paris for a little over a year. He’s originally from Rimini, a concrete beach resort on the Adriatic coast. “We went by here in a cab recently and we said “hey, let’s come and walk around here Monday after work, to enjoy the lights and the Grands Magasins all prepped up for Christmas””, he explains with  a slight  accent. If he uses “we”, it’s because he came with Angie, his Belgian girlfriend. They’ve just finished late lunch at Sanukiya, a Japanese restaurant on rue d’Argenteuil. Serafini: “We came to walk around the Boulevard, which  is really magnificent with all those lights… And we take pictures for her Instagram: I’m her personal photographer!” Nicola and Angie’s smiles are contagious, and the memory of Rimini, its nativity scene and the “biggest ice rink in all of Europe” that they put up every winter seems to fade in the distance. “It’s probably the nicest store windows I have seen but it has to come after Eurodisney, don’t you think? He ranks half-jokingly. It kinda looks like the ride with the dolls, It’s a Small World, and it’s really beautiful!” 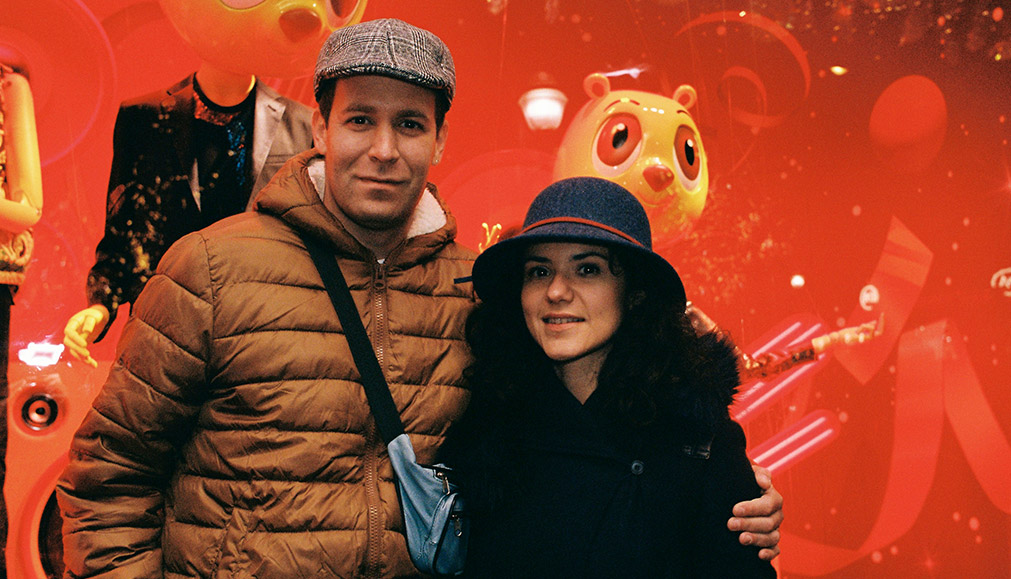 “We have a Galeries Lafayette department store in Istanbul, but there isn’t as much work on the lights, its simpler, less joyful than it is here” compares Batuban Unalan, who’s staying in Paris for a few days with Yasemin, his wife. “We celebrate New Year’s but Christmas isn’t part of our traditions, he adds, of course, since we’re a Muslim-majority country. They reproduce some of these animations but it isn’t like that yet”. Bateban and Yasemin start their ramble with the Printemps Haussmann windows. Then, they might do some shopping. Yasemin draws the first conclusions of their Parisian stay: “I find it more interesting here than on the Champs-Élysées, there is more people, more things going on”. Batuban takes care of the conclusion, with a smirk. “The lights make everything more beautiful, he observes. Which means that capitalist design works: we’re drawn to the lights like mosquitoes…” 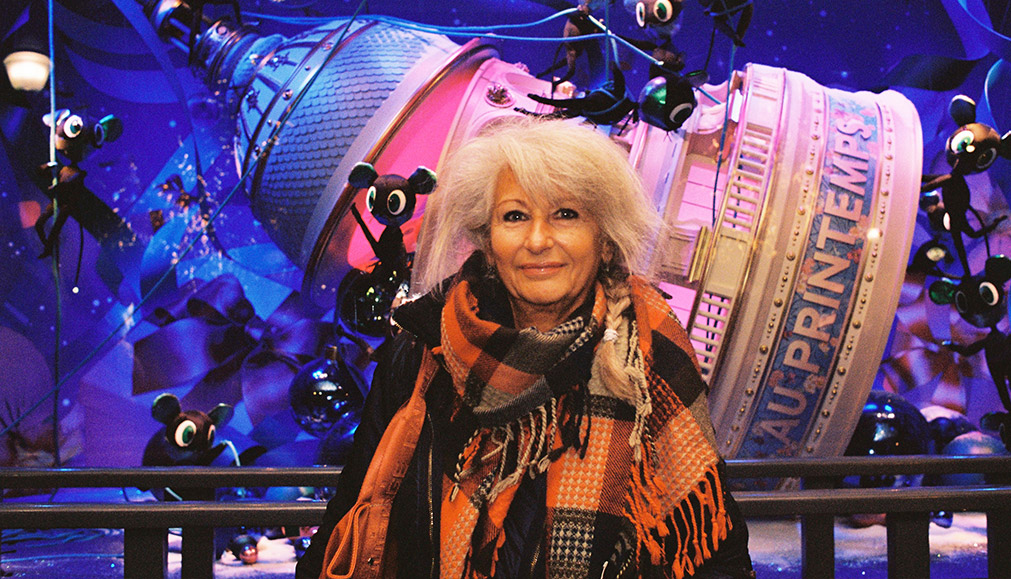 Myriam Dumoulin hasn’t come that far since she lives in Lille but every year, she comes down to Paris specifically to see the store windows. “I took the train in Lille today at noon, she offers as a precision, and I spend the afternoon in Paris to see the windows because it’ll be much more crowded afterwards! I always find them so beautiful…” She takes pictures that she won’t put on Facebook, but that she’ll send to her children by text. Next time, she might come with her grandkids so she takes advantage of the opportunity to “do a little shopping” and cross out a present mentioned on one of the lists sent to Santa. “I’m 66 and I’ve always lived in Lille, but I must have been coming here for forty years now. They used to have lights in Lille too, on the Printemps storefront rue Nationale, but they stopped doing it”.

The Galeries Lafayette store windows are home to the “Christmas hive” and those of the Printemps to funny looking stuffed animals until January 5th. What if it was nice being a mosquito after all?